Wonder why Athens hosts a brew week? It started with a set of problems. 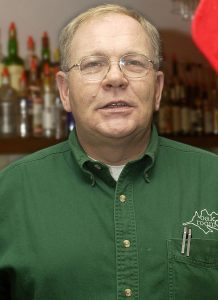 “Craft beer is the way to go,” Jon Sparhawk, then owner of The Oak Room, told Dan Gates in April 2005. “Take this idea and run with it.”

Sparhawk tapped his friend Dan Gates to serve as the first director of OBW, back in the summer of 2005. Early participating breweries included Thirsty Dog, Black Box, Great Lakes and The Brew Kettle. Over 70 Ohio craft brews were available at over 36 venues in Athens that first year.

Sparhawk passed away suddenly just before the second Ohio Brew Week. His name and influence are memorialized in the “Sparbock” beer, brewed by Jackie O’s annually for Brew Week. Jon was a beloved Athens resident, highly involved and known by brewers all over the state.

Marking the “end of an era,” original executive director Dan Gates and his staff stepped down after eight years, with 2013 marking the last year of their involvement.

Weston Lombard took over in 2014 and served as director for two years. The tenth anniversary Brew Week in 2015 saw record crowds and beer sales.

The Ohio beer scene grew quite a bit since the first Ohio Brew Week. You can find craft beer in grocery stores and dive bars. Say “craft beer” to someone, and they’ll definitely know what you’re talking about.

It’s the perfect environment for Ohio Brew Week to continue, after 16 years of innovation, to set the bar higher and higher each summer and with seasonal events, including Fall Fest in Athens.

We’ll see you in July in Athens, Ohio for Ohio Brew Week!

Check out a 2008 video made in memory of Jon Sparhawk…featuring a very young-looking Brad Clark of Jackie O’s discussing how the “Sparbock” came to be.